And this week, they almost got their panic. Almost, that is.

Update: After further review of CDPH's alert, I rephrase that last paragraph: the original performer had tested negative, then performed unprotected in two shoots within the two week period where he unintentionally infected at least one other performer. Still, the question remains of the length of time between his last negative test and the shoot, as well as how he got infected to begin with. Also, the second performer was infected in a subsequent shoot, not the original.

Now, the second performer was ultimately confirmed to have gotten infected in spite of confirmation that he had been tested and cleared of HIV previously prior to the fateful shoot. No confirmation yet, though, has been made of how soon either performer was tested prior to shooting that scene; but it was confirmed that the test used was the more traditional ELISA antibody test. That's the HIV test that is 100% accurate when the antibodies are present, but also with a latency period of nearly 3 to 6 months where the antibodies can mask themselves in the bloodstream during seroconversion without detection. Bookmark that fact, too.

And remember, all this took place in September. Yet, it wasn't until THIS WEEK, that California's Department of Public Health managed to put out a public alert warning people about this transmission of HIV. Three months, y'allz. Here's a screenshot of the alert; the original is available from the CDPH website as a PDF file. 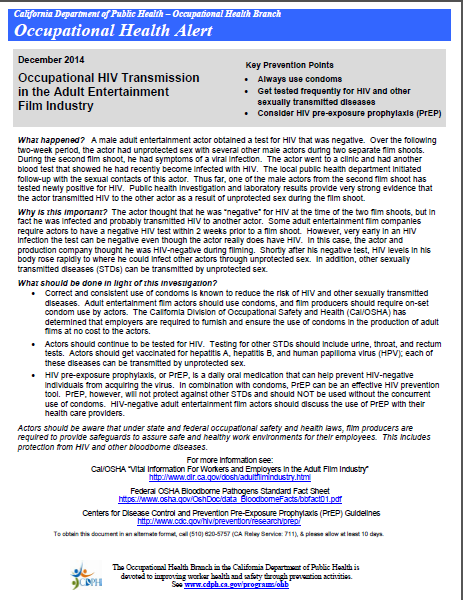 A few hours after that was released, the AIDS Healthcare Foundation (that's right, folks, they're still at it, even after their legislation was booted out of the Cali State Senate) released this press statement essentially declaring their usual total victory in the condom mandate fight. Then again, Michael Weinstein is not known for avoiding microphones when it warrants his greed.

Some high/lowlights of the peak bullshit spewing from AHF's "statement":

LOS ANGELES--(BUSINESS WIRE)--In a report released earlier today, the California Department of Public Health, Occupational Health Branch says that it has documented the on-set transmission of an HIV infection from an adult film performer thought to be working out of state (in Nevada) to another performer the individual worked with. The case involves a male performer who was filmed performing with other male performers. The newly infected individual initially tested HIV-negative in California after what was on–set exposure out of state (shooting films without condoms or protective barriers); however, two weeks later, the individual in question then tested HIV-positive. In mid-October, the Free Speech Coalition (FSC), the adult industry trade group, instituted a moratorium on adult industry filming due to reports of an industry-related infection—due to what is most likely this latest HIV case. The filming ban was lifted by the FSC the following week.

“This is not AHF or supporters of condoms claiming that an HIV transmission occurred on the set of an adult film. This is California’s Department of Public Health and OSHA Occupational Health officials who vetted the performers' blood samples with the CDC and concluded after genetic sequencing that this HIV infection occurred on set,” saidMichael Weinstein, President of AIDS Healthcare Foundation (AHF). “For years adult film producers have claimed that performers who have tested HIV-positive while working in the industry did not contract HIV in the industry, but became infected through exposure in their personal lives outside and away from adult film sets. This new case puts truth to the lie that the industry has promoted year-after-year, years that sadly saw several additional performers infected while working in the porn industry.”California health officials confirmed the on-set transmission after sending blood samples to the Centers for Disease Control (CDC), which genetically sequenced (genotyping and phenotyping) the virus found in the performers involved, and matched it to an adult film actor the infected performer worked with.

The adult film industry concedes that it did have three (3) confirmed on–set transmissions in 2004 after a male performer who had worked in adult films in South America returned to the U.S. and resumed filming adult films in Los Angeles—subsequently infecting three female partners on set.

Nevertheless, other outlets picked up on the story with the same distortion: the Associated Press wrote a version that conveniently reprinted AHF's version of the truth, which got picked up by such esteemed online media outlets like Gawker and the Guardian.

And even Shelley Lubben's Pink Cross Foundation ministry couldn't avoid piling on with their own touchdown dance, either.

Problem with all this is: they only got one side of the story. Here's what they missed:

Remember when I said that the affair took place in a gay male porn shoot in Nevada? With only gay male performers? Well, in case you forgot: in early October, some health care authorities investigating that particular case alerted the Free Speech Coalition that there was a possibility that the infected performer may have crossed swords (so to speak) with an active "straight" performer whom had used the far more stringent testing protocols used via FSC's PASS system. The PASS system uses a far more accurate and far more effective test, Aptima, for detecting HIV. Unlike ELISA, Aptima can detect traces of the HIV virus within 6-10 days of initial serotransmission. That's 6-10 DAYS, not 3- 6 MONTHS like ERISA.

Thankfully, that active performer and his contacts were found to be free of HIV or any other known STD; and on October 20th, the FSC lifted the moratorium and allowed production to resume.

The fact that no "straight" performer had been infected by this action, or the fact that even the contact had taken place in a venue that didn't adhere to FSCPASS protocols, must have been known to CalOSHA staff when they issued that "alert" last Monday, right??  RIGHT???

At least Weinstein's rantage can be excused by his one-sided moralism and his greed for condom dollars. But, what the hell is CalOSHA's and CDPH's excuse? Have they allowed Weinstein and AHF to anally fist them (figuratively speaking, of course) so much that AHF is now running their department? If this is any precursor of the rules for "barrier protection" that they want to impose on adult production nationwide, then the industry is really farked beyond rescue.

Then there is this claim by AHF in their "statement" that the second performer was in fact tested and found negative prior to that shoot, and that fact blows away the excuses of the anti-condom mandate crowd. Right....sure...really. If the test was an ELISA test as it probably was, then the question remains: how long was P#2 (or even P#1) tested before shooting?

Maybe this post will get through as fast as all the AHF/CDPH propaganda bullshit has..or not. In any case, someone needs to wake up and deliver the whole story behind this before it metasizes into another condom mandate scam.

Posted by Anthony Kennerson at 2:11 AM